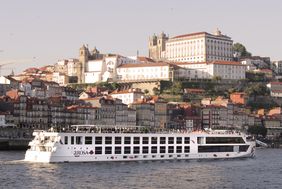 Rostock, 18 May 2021 – A-ROSA currently plans to resume cruising on Europe’s rivers in June. The move follows the success shown in both the ongoing vaccination roll out and the measures put in place to control the pandemic across Europe.

It is expected that A-ROSA’s cruises on the Douro, Rhine and Danube will restart by mid-June at the latest and in France by the end of June.

Countries across Europe are currently outlining their plans to reopen for tourism. Portugal has already opened its borders to tourists whilst Austria will allow river cruises on the Danube again from 19 May. Slovakia and Hungary have not yet given dates for when hotels (including river cruises) will open, but both countries are now recording low case numbers. The German federal states along the Rhine have included tourist accommodation (including river cruises) in their current reopening of tourism plans, expected to be in place by mid-June. The Netherlands and Belgium are also expected to follow suit and in Switzerland, hotels are already open. A four-stage plan in France is set to allow cruise and passenger ships to operate from 30 June.

Jörg Eichler, managing director of A-ROSA Flussschiff GmbH comments: “It is really encouraging that tourism in Europe finally looks like it can return soon. We are busy adapting and updating our current protocols in line with the latest regulations in the countries we sail through, and will announce them in the coming days. Our successful five months of sailing in 2020 clearly shows that cruising with A-ROSA can be safe and enjoyable.”

International guests will be welcomed on board in line with each countries entry and exit requirements.